Market: The market is warming up in the second half of the year

As early as the beginning of this year, Liu Zhaohui, then the general manager of the European Department of Decoration in Guangdong, predicted that since the home building materials industry had a lag period of about half a year compared with real estate, the Guangzhou (real estate) home retail market will start to pick up after July. There are still quite a few furniture retailers who are still pessimistic about the market. They believe that the long-term downturn has made the market difficult to return. It is not that the rebound can rebound. Many brand agents have already been hurt, and the channel layout has been disrupted. In the past three years, it is difficult for the Guangzhou home furnishing industry to reproduce the similar situation in 2007.

This year's market performance confirms the former's point of view: after entering the peak season of decoration in September, due to the influence of multiple policies, the demand for renovation and secondary decoration of new houses in Guangzhou has obviously exploded, plus between major brands, brands and stores. Active joint promotion, a lot of wood flooring, custom furniture, cabinet brands in the fourth quarter of the retail momentum has clearly improved.

Due to the large number of home building materials industry, the level of development is uneven. In recent years, although the market as a whole is not very prosperous, there will always be

One, two categories have sprung up, becoming the darkest horse that has the strongest momentum in the past and pulled up the entire industry. From 2010, the door and window hardware occupied half of the building materials exhibition, and in 2011, the wardrobe joined the trend and then went to the overall home fashion trend in 2012. Throughout this year, under the background of many powerful categories, the custom furniture sector is still unique, the development momentum is steady, and the sales of mainstream brands are growing steadily.

From this year's market performance, traditional decorative materials such as ceramic tiles are flat, and the custom furniture sector, which has always been highly concerned, stands out. The custom industry represented by Sophia (002572, stock bar) wardrobe, Shangpin home delivery, European cabinets, Shi Nieman wardrobe, Laoka wardrobe, etc., has grown stably. Sophia wardrobes and European-style wardrobes all said that the year-on-year growth was over 30%. There are also custom-made brands such as Shangpin Home Furnishings, which are focused on the shopping malls of large shopping malls. In Guangzhou, there are many stores in the prominent positions of Zhengjia Plaza, Guangbai Department Store and Wanda Plaza, with the huge flow of department stores. And the precise target group has greatly improved the brand exposure and brand image, and actually increased sales on the spot.

Standard: multi-sectoral regulation of the development of the home industry

In February this year, following the official implementation of the â€œGeneral Technical Conditions for Mahogany Furnitureâ€, some new standards for the home furnishing industry have also been released. On September 1st, the â€œRegulations on the Operational Services of the Home Furnishing Industryâ€ was implemented, stipulating that the actual construction cost of the home improvement should not exceed 8% of the contract price; on December 1, the â€œGreen Plate Purchasing Regulationsâ€ was implemented, which defined the green plate as the process of manufacturing the wood-based panel. The adhesive used is a formaldehyde-free adhesive, and the release of free formaldehyde in the wood-based panel is not higher than that of the wood used; on December 1, the first standard of the high-speed development of the wood door and window industry was officially implemented, and the classification of wooden doors and windows products, nouns The term is required to test and store the product.

Question: "Quality Doors" come together to cause social concern

Following the Da Vinci incident in 2011, the home industry became a social hotspot. In 2013, while the industry brands went hand in hand, they also issued some discordant voices. Negative events such as â€œSyroland mattress formaldehyde exceeded the standard several timesâ€ and â€œ9 well-known brands lead exceededâ€ were frequently taking the headlines. The major brands of homes are â€œinvolved in the caseâ€, one is the illegal operation of some unscrupulous merchants, the lack of consumer environmental awareness, the strict control of the store, and the lack of supervision. Second, because the home furnishing industry is generally flat this year, many SMEs are forced to fund Stress, even if it finds a problem, will let it be "frozen" with luck. Therefore, it is recommended that consumers go to the professional store to make purchases, which is convenient for rights protection.

Marketplace: no large-scale home shopping mall opened throughout the year

Since 2008, although the home building materials industry has entered a downturn, the foreign chain home shopping malls have advanced into Guangzhou. The pace of expansion of local home shopping malls in Guangzhou has not stopped. In 2009, there will be good luck to open the home plaza, etc. In 2010, there will be a home club, Red StarÂ·Meikelong Pazhou Shopping Center has been opened one after another. In 2011, Red StarÂ·Meikelong Tianhe Shopping Center opened. In 2012, Ouyada Home Huangshi (real estate) store opened, and in 2013, as of the end of December, in addition to taking over Yuewangâ€™s home. Hongshuwan Furniture Zhongshan (Property) Avenue East Store is in the middle of the new year. The Oriental International Building Materials Center, which has been prepared for a long time and promised to open during the year, has failed to fulfill its promise for various reasons. At the beginning of the year, it was rumored that Guangzhouâ€™s first store, Red StarÂ· The third store of Meikailong Guangzhou will open in the year, but there is no news because of the market situation. Looking back, it seems that there was no large-scale home building materials store opened in Guangzhou in 2013. This is the only year in which the large-scale home shopping mall has not been opened in the past ten years. It also reflects the weakness of the rapid development of the home building materials industry in the past decade. Low valley.

Since the beginning of this year, the low turnover of home stores is the normal state of the market this year. Due to the high professionalism of the home market, once it is affected by the real estate market, it will make a clear performance in the first-line market. The flow of people in this year's store is similar to that of last year. In addition to holding large-scale promotions, there are few passengers in Guangzhou's large-scale home stores, and there are few passengers on weekends. It is the dream of how many home stores to be able to enter the bustling and crowded business district and share the flow of people brought by department stores and supermarkets. And many companies have done this this year. For example, the former â€œGrand New Lifeâ€, which is the former residence of Gao Demei, has a large-scale family shopping center with many formats such as Tianhe City Department Store, Auchan Supermarket, Suning Appliance, Xiao Q Children's Park, cinema, food and beverage. Weeks and weeks have concessions, and the huge flow of people has also brought the new life of the United States to the target consumer groups of department stores and supermarkets, which has a certain promotion effect on store sales. At the same time, HI Department Store on the 4th floor of Zhengjia Plaza also used the advantages of the business district to share the flow of people in this department store. HI Department Store mainly sells creative home accessories, including many excellent imported designs, and promotes the further development of Guangzhou's household goods industry through excellent geographical location and endless stream of people.

The business operations of the merchants are difficult and the operation of the home store is also the same. Many merchants are unable to pay rent, and there are collective anti-rental phenomena in multiple stores. There are also some stores that attract people, rent or rent-free to maintain operations. In this context, is the home store choosing to compete with the home brand, or is it sincere cooperation? From the market performance this year, the traditional promotion forms such as discount promotions and gifts are becoming less attractive to consumers. In 2013, Multiple stores expressed a desire to actively cooperate with their merchants. The home shopping mall chooses to cooperate with its brands and factories to promote the cooperation and promote the flow of people and sales to achieve a win-win situation.

At the same time, the home store has also strengthened its cooperation with the home brand alliance. Alliances such as the Champions League, the First League, and a home in Guangzhou are scattered and survived in major home shopping malls in a decentralized manner. In 2013, the movement of home alliances and stores suddenly became frequent and sought marriage. In December, the Champion Alliance opened its first thousands of square meters of O2O integrated store in Guangzhou Weijiasi Home Plaza as the center of the online and offline display of the alliance; and the first alliance then opened the e-room experience center in the new life of Mercure. Create a true one-stop online and offline home experience museum. This is the performance of the home store to put down the defense, and actively cooperate with the home brand and home brand alliance to seek coexistence.

In modern home decoration, more and more people will choose the sliding/push-pull wardrobe door. This product has the advantages of light weight, convenient use, high space utilization and simple customization process. The door frame of the wardrobe is made of aluminum alloy. The aluminum profile has strong plasticity, a wide variety of colors and patterns, and can be combined with any plate to perfectly combine the home style. And the aluminum alloy frame is more stable and not easy to damage. 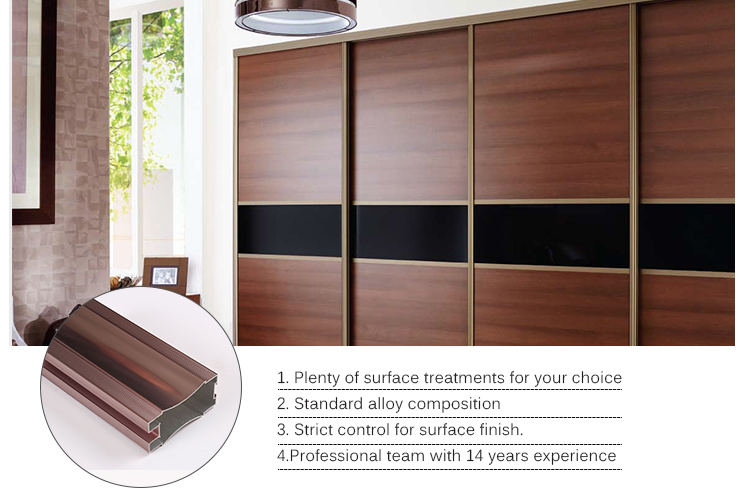