Skip to content
The leader's base is the pinnacle of the photovoltaic industry. The progress of each stage of the front runners has caused hot debates inside and outside the photovoltaic industry; the third-phase runners of 2017 entered the tendering stage, and after the implementation of the new rules, what are the highlights and What new situation will happen during the period? Combine domestic and international economy and photovoltaic...

The third batch of photovoltaic front-runner bases in 2017 has been approved by the National Energy Administration. On the basis of summarizing the first and second phases of work experience, the responsibilities and division of labor of the front-runner bases are more clear, and the hidden costs of non-power station construction are lower. And the various policy measures are more transparent and fair. The National Energy Administration stipulates that the third batch of photovoltaic power generation front-end application base projects will complete the project development and development enterprise work on March 31, 2018. The project must be started on June 30, 2018, and the power generation will be completed on December 31 this year; The front runners completed the bidding work on April 30, 2018 and were completed on June 30, 2019.

The National Energy Administration has made time for the space-for-space arrangement and the fierce competition for the front-runner project!

The front runners staged a fierce confrontation between central enterprises and private enterprises.

The following picture shows the winning bidders and electricity prices of the leader of Inner Mongolia Baotou and Shanxi Yangquan in 2016. Through two projects, the competition pattern of the front runners can be basically understood. 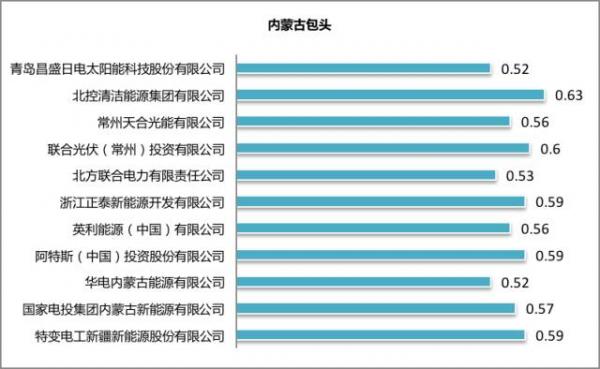 (Baotou base hit a low of 0.52 yuan in the second phase of the front runner)

Guozitou Power Central Enterprise and Private Photovoltaic Manufacturing Top Ten basically occupy half of the second-phase leader base project. Then, is the third batch of front-runners still facing the two camps?

(1) The National Development and Reform Commission of the power central enterprises has clear guidance. It is required that the proportion of new energy installed by each group before 2020 should not be lower than 15%. By acquiring the assets of photovoltaic power plants and adjusting the installed structure, this is one of the kinetic energy of central enterprises, and the second is photovoltaic. The front-runner project itself has a good return on assets and is attractive to central enterprises with lower financing costs.

(2) Leading private enterprises with photovoltaic modules, inverters and EPC as the main industry, on the one hand, activating the photovoltaic application market and driving the sales of related products, it must be one of the main players to participate actively. On the other hand, it has accumulated photovoltaic power station development for several years. Experience, from the perspective of sustainable development, improve the allocation of corporate assets, and do not rule out the flexible business strategy of related asset transactions after the completion of some enterprise projects.

(3) Most provinces announced that the ground-based power station indicators after 2017 will be mainly used for PV poverty alleviation, which will make the competition of this front-runner project more intense.

The above fundamentals, the decision of the third phase of 2017 is still the mainstream pattern of competition between central enterprises and private enterprises.

What new situations will occur in the third batch of top runners in 2017?

After the launch of a series of new policies by the National Energy Administration's photovoltaic power station development and the bidding rules for this front-runner reform, what new situations will emerge?

(1) The cost of peripheral construction is reduced, and the construction conditions and supporting system are perfect. This competition will be more intense than the second batch. With reference to the decline of Baotou in Inner Mongolia, the transaction price may fall below 0.40 yuan, basically reaching the level of parity online. .

(2) The Energy Bureau stipulates that the front-runner application base can be completed by the end of 2018, space is exchanged for time, and the photovoltaic manufacturing chain can reasonably arrange annual production capacity. The judgment of the supply price of components in October 2018 becomes an important option.

(3) The US tax reduction policy has triggered the judgment of the financial sector. Chinaâ€™s interest rate hike in 2018 is not known to occur in that quarter, and interest rates are rising or affecting the final offer.

Sharp topic! Does the new rule of the front runners cause "marking"?

The new front-runner base of the National Energy Administration clarified the declared minimum electricity price during the bidding process. If the lower-level electricity price is lower than 5 cents per kWh, it is directly judged that it is not allowed to be selected. There is a vague controversy over this regulation. How to implement the operation and whether it will evolve In order to participate in the bidding enterprises, they need to be translucent beforehand to disclose the situation of their respective reserve prices. Does the regulation cause â€œdefectsâ€? It will be the most varied part of the New Deal, and it is necessary to add the rules for winning the lottery after the minimum price.

In fact, the old faces of the leading enterprises and the leading enterprises in the photovoltaic manufacturing industry have been in the high-speed development of photovoltaic installations in the past few years, and the daily business overlaps frequently. It is not possible to exclude the negotiation price before the bidding. Some people in the industry expressed the same view.

Does the front runner campaign break into the dark horse? Or trigger the squid effect!

It is suspense whether the multinational PV investment enterprises participate in the bidding for the front-runner project, whether there is squid activation, and it is the biggest attraction for the third-phase PV leader.

At present, Chinese companies Jingke, Tianhe, Artes, Zhongli, etc. all participate in and win the bid for the development rights of some foreign PV power plant projects, and the new rules of the front runners are basically close to the international standard for the bidding conditions of photovoltaic power plants, whether they have obtained cross-border energy investment. The recognition of enterprises is also one of the signs of testing whether China's PV development is in line with international standards.

The UAE National Power Company has entered the Indian PV power plant development market, citing news from some well-informed sources that some new energy companies in the Middle East may compete in the form of cooperation with domestic companies and participate in the photovoltaic power generation base project.

Photovoltaic leaders are carrying the technological advancement and the heavy responsibility of the Internet, and hope is to ignite the flames of China's green and low-carbon finance, the messenger of international interaction, and the related topics continue to be fermented.

Synthetic Resin Roof Sheet if made of high weather resistant ASA engineering resin as the surface material, and high-quality PVC wear-resistant resin as the bottom material, which is formed by one-time co extrusion technology. ASA high weather resistant engineering resin layer on the surface is the most critical, which directly affects the service life of synthetic resin tile.
Its service life is generally about 30 years. Synthetic Resin Roof Tile does not need repair and maintenance in the use process, saving time and energy, and convenient installation.